Editor's Note:All photos were taken after the story took place and added by the author

“Dad we made 30 bucks!”
“Great!”  I say, watching a close game on T.V.  The boys are selling plums from our back yard.  The day before, I found Oliver dangerously clinging to the top of a ladder as his older brothers climbed around him harvesting with buckets.  Our dog, Scout, was passed out from eating the fermented ones rotting on the ground.  I had seen him lightly scratching at the ground wondering what he was doing until I picked up his poop and found the plum pits.
A time-out is called and I do some quick math.  Thirty dollars?  That’s 120 snack bags sold at 25 cents each.  That’s a lot of plums.
I then realize it’s impossible. I run outside to a little blue table on the driveway with a “SALE” sign taped to it.  There are a couple of stools, a box filled with quarters, and dollar bills blowing away.  The neighbor kids have come over to “help” and hold cardboard signs in the middle of the street.  The sign may say “Sale” but might as well be “Stop” because they’re like a check station at the border, halting all the passing cars.  In the garage, the door to the mini-fridge is ajar.  I walk over to close it.  My soda, juice spritzers, and beer have been replaced with a snack bag of plums.  I look out to the street, the kids are caffeinated up on Starbucks Refreshers, pointing, yelling, and giving out deals, “You buy three, we’ll give you a THIRD for free!”   Business is brisk and I feel like a restaurant owner who borrowed money from the mob.  The only wares left on the table are the plums, neatly displayed in rows.   The only customer for those is the dog, who gets them from the little neighbor girl, Hazel.
“Sam!”  I wave my middle child over.  He is 7.
“Yeah?” he says annoyed by the interruption.
“Where are the drinks from the fridge?” I look down the block and see a pack of skaters on the corner; some are doing tricks in the street but most sit drinking.  They see me talking to Sam and get on their boards to ride off.  There went my beer.
“Oh, Oliver got that out…” He’s blaming the three year old.

I’m trying to keep my cool, not make a scene, because my neighbors are literally parked in the middle of the street.

Scout burps and rolls on his back.  Hazel puts a plum near his mouth and says, “Sit!”  He just wags his tail, “Good Dog” she says and feeds it to him anyway.
Oliver goes by dragging my fishing poles, he’s yelling for someone to help him.
Gabriel has remnants of whatever was in the garage fridge.  He is selling it like a cigarette girl walking between the blocked cars.
“Cold Drinks!  25 Cents!”  One of the neighbor kids has two fingers in the air, apparently with an order for the Chevy around the corner.
“Dad?” yells Gabriel, “You have change for a twenty?”


I stare at my tool bench, where’s my drill? 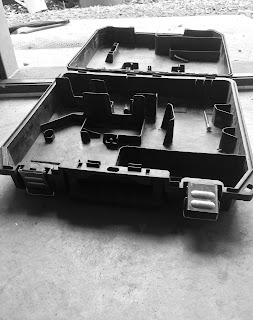 A funny link-Hyperbole and a Half is a Blog to check out.
©All Rights Reserved
©Copyright2015DavidBrabec
Posted by David Brabec at 2:20 PM